How to target a specific row in a table via CSS

This week I needed to make use of another CSS Pseudo element which is – like many of its colleagues – a rather sharp tool in the CSS toolbox.

I was using the eMember plugin for a membership site and wanted tweak the signup form. By default it looks like this (I’ve already removed a rather ugly looking border from the table): 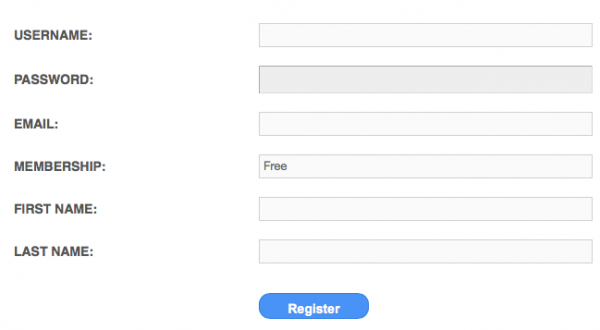 The site I’m working on will provide a free membership, but that’s a technicality that users can’t change – and let’s face it the entire line reading “Membership: Free” could do with vanishing.

Rather than hack core files, I was able to override it with a CSS tweak and make it disappear. The problem is that this particular row in the table doesn’t have a class or ID to reference it.

CSS Pseudo Element nth-child to the rescue: with it, we can target a specific occurrence of the table row element (in our case, the fourth one down). Here’s how:

First we have an ID to target the specific area which is #wp_emember_regoForm. That’s the entire registration form though. In it, we drill deeper into table (which is the table shown above), and in it we have tr and td elements. td is a single cell, whereas tr is a whole row so we choose tr. Those are standard HTML elements.

Now all we do is set its display property to none, making it vanish without a trace. Here’s the final result – as if it never happened:

The nth-child selector can do other funky things, and you probably have seen it in action. Ever wondered how designers can make every other row in a table look slightly darker? Instead of a number, they use “odd” or “even”, targeting every other cell (starting with the first or second one):

nth-child even works with formulas, and of course you don’t have to target a table. Imagine making every other p tag disappear, or style every 3rd link in a different colour.