How to view local websites on your iPad with Squid

I like developing and testing websites on my local network before they go live. On both Mac and PC it’s easy to tweak the /etc/hosts file so that the URL doesn’t point to a numeric IP, but instead to http://yourserver (or something equally catchy).

On iOS devices we can’t tweak that file unless we deal with the highly unethical practice of jailbreaking. Turns out there is an easier way to surf local websites on mobile devices, simply by using a Proxy Server such as Squid.

A Proxy Server is often used as a caching server or to disguise where a request is coming from. For example, surfers use proxies to pretend they’re visiting from a different country, or ISPs  use proxies to speed up data delivery in local areas. In simple terms, a proxy is fetching data on our behalf. Then we talk to the proxy and get the data from him. Think of a Proxy Server as a middle man in a network transaction.

To surf local websites on an iPad or iPhone, we can connect to our WiFi network with a proxy on a machine on which we CAN tweak the /etc/hosts file. Let me show you how this works.

For this example I’m using a development server on my local network. It’s a simple LAMP Stack running CentOS.

We’ll install Squid on the development server. Websites are accessible via http://localhost but also as something more swish when the /etc/hosts file is tweaked, for example http://yourserver.

Squid is available via yum, and installation is simple:

The second line will start Squid on every server restart, just in case.

Squid should work out of the box on port 3128, but if you ever need to tweak this, you can do so in /etc/squid/squid.conf.

When you connect your iOS device to your local WiFi network it will do this without a Proxy Server by default. We’ll change this under Settings – WiFi, then tap the little info icon next to your active connection. It goes without saying that the development server needs to be on the same network as your iPad.

At the bottom of this page, under “http proxy”, select manual and add your development/proxy server’s numeric IP, and 3128 under Port. Leave authentication off. It should look like this: 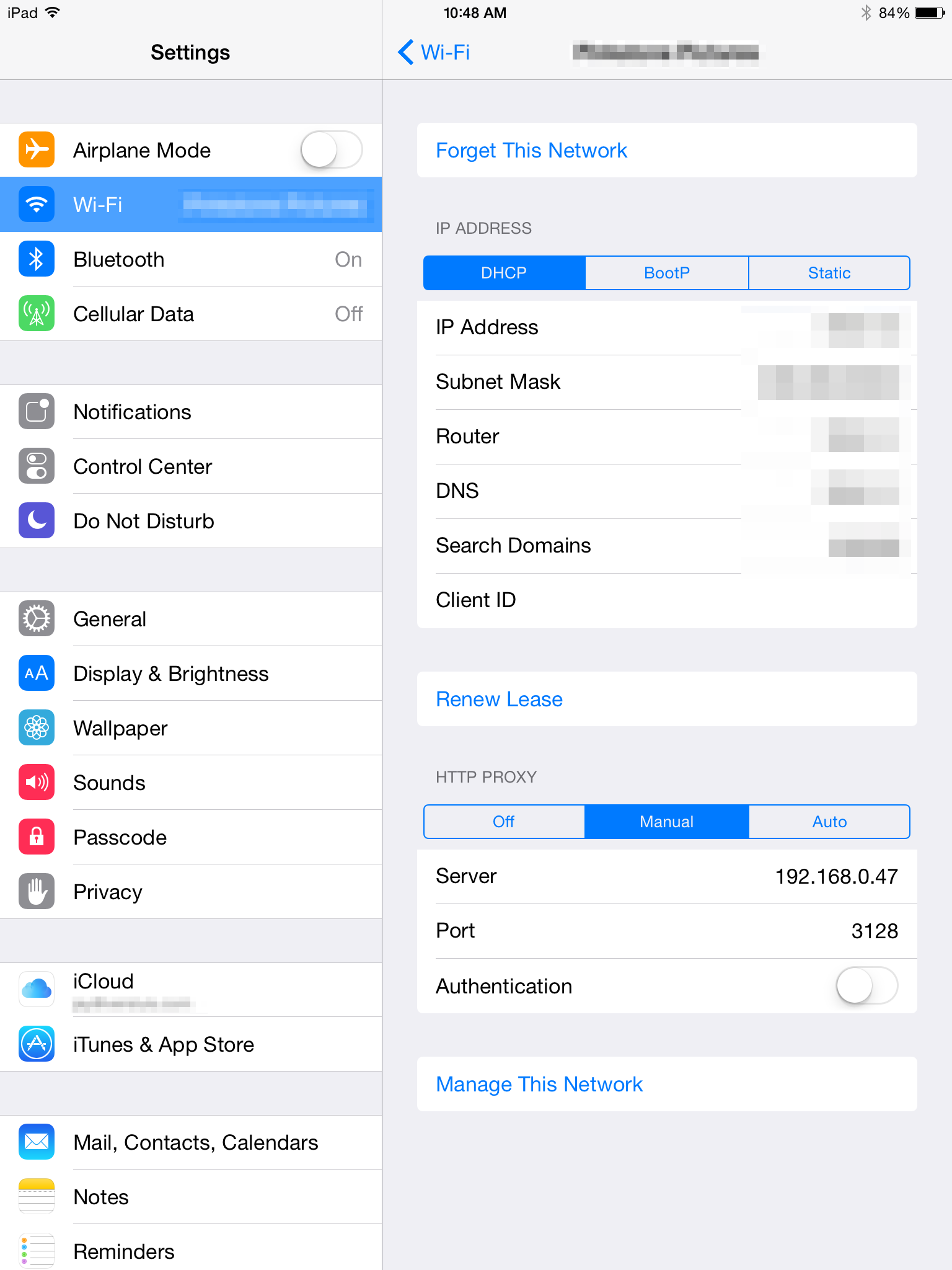 Now any tweaked URL that works on your development server will work on the iOS Device too: visit http://yourserver to verify this.

Should Safari give you a problem, maybe due to its spurious caching technology, head over to Settings – Safari – Clear History and Website Data.

Squid will cache every request you make on your iOS device as long as your WiFi connection uses the proxy setting. Chances are that your development server isn’t going to deliver results as fast as non-cahced results would come in from your router – unless you surf the same slow website over and over.

Also, Squid will leave a record of every request that has been made in /var/log/squid/access.log. If you’re using such a setup in your office, you may need to tell users on the network that their requests will be logged.

So if you’re concerned about any of these aspects, simply switch the proxy off in your WiFi settings.