How to switch off Developer Beta Downloads on Mac OS X

A while ago I thought it would be fun to run the OS X Developer Betas on my MacBook Pro. That was before El Captain was released. Once the buzz had died down I grew a little tired of the bi-weekly point release downloads that took about an hour to install.

So how can we tell a Developer Beta Mac to become a “normal” non-beta Mac again?

While forum posts suggest that it’s an impossible feat, it’s actually no trouble at all. Simply head over to System Preferences – App Store and find a button that reads “your computer is set to receive pre-release Software Update seeds”. 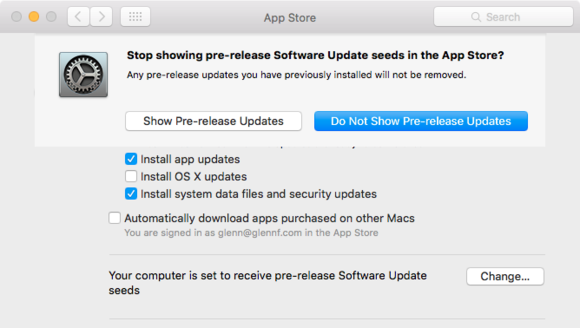 Click it and an overlay window is shown, allowing you to “not show pre-release updates” anymore. Be warned however that when you do this, the option to bring up this dialogue disappears – so once switched off, there’s no going back easily (unless you install another beta from scratch, like you did when you first obtained yours).

Note that when you switch this feature off, your Mac will remain on the beta you have currently installed, until a new release comes out and replaces it. This option will not remove beta files from your machine, nor will it turn your beta system into a non-beta system instantly: you’ll have to wait for the next release and use the regular update option for that.

You can always check what’s currently installed by heading over to the Apple Icon and select About This Mac.