How to enable WiFi on your Samsung NC10 under Centos 6.x 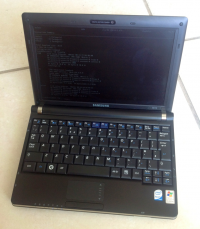 When I installed CentOS on my NC10 last year I did so knowing that its battery was bust. Since it wasn’t going to live without a power supply, I didn’t setup WiFi at the time – the NC10 being tied to one cable, I simply added another (the network cable) and that was that. Worked fine and without problems.

Today a new battery for my NC10 arrived, breathing new (wireless) life into the little guy – and needless to say now I wanted to setup WiFi. Sadly I don’t know enough about network adaptors under CentOS, so I thought how hard can it be?

Actually it’s easy – it’s just not very well documented on the whole wide web due to the multitude of Distribution vs Hardware configurations.

Thanks to two great articles (by Joris and Paul – find links at the end) I managed to connect my NC10 to my WiFi network: an Apple AirPort Timecapsule. It works a treat. Thanks guys!

I deviated a little from both articles, so here’s the “remix” which should work specifically for the Samsung NC10. I’m running CentOS 6.5 in 32bit, minimal installation without any bells or whistles, on a 1GB Intel Atom machine.

Before we begin, I assume you’ve read my previous article about how to get CentOS onto the NC10 and make it work with a wired connection. It doesn’t matter if you’re booting from a USB stick or the internal drive, as long as CentOS 6.x is up and running and you have an internet connection on a wire. By the end of this article, both the wired and the wireless connections should be working.

I only had the minimal CentOS installation running, so many of the gadgets to WiFi Satisfaction were not present on my device. Let’s install the following ingredients:

With those in place, let’s check if the Atheros WiFi card has been detected properly by the system:

This should show you eth0, lo and wlan0 – the latter is our (currently unconnected) WiFi adaptor. Take a screenshot of this with your phone or camera as you’ll need the MAC address later (it’s the HWaddr parameter in the last block): 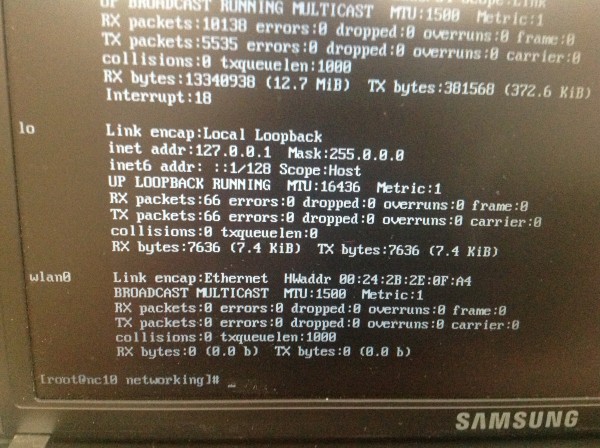 There’s a great article on the CentOS Wiki about setting up the specific driver for your card, many of which come bundled with CentOS 6 – which includes the one built into the NC10. According to this, all we need to do is modprobe the correct driver, enable NetworkManager and we should be good to go.

But which adaptor are we dealing with here? We know than the NC10 has an Atheros card, but do we need the ath5k or the ath9k driver? Let’s find out with a tool which comes as part of the pciutils called

Thanks to Alan Bartlett for this tip! This tells us that the NC10 is running an Atheros A542x and we should be installing it with the following steps:

The second line loads the driver at startup. We can now remove the standard network and wpa_supplicant services on startup because NetworkManager will take care of those for us from now on:

Now that CentOS can talk to our card, let’s connect to our WiFi network.

After writing this article yesterday I realised that setting up the network adaptor was the easy part… connecting to the actual WiFi network is much tougher! That’s because there is not a single piece of documentation on the web that explains how. I’ve read through thousands of fragments, assuming prior knowledge I do not have, none of them explaining the whole picture – at least not in a way that it makes sense to me.

I usually figure these things out eventually – but I’ve decided that it’s material for a separate article. I’ll post a link here when it’s ready.

Thanks to all these articles and their amazing authors, as well as the battery supplier portportal on eBay, my trusty Samsung NC10 can live and breath again – with no strings attached:

1 thought on “How to enable WiFi on your Samsung NC10 under Centos 6.x”